India’s stand-in skipper Rohit Sharma revealed that his opening partner Shikhar Dhawan had looked to bat as long as possible during their match against Pakistan at the 2018 Asia Cup.

During the post-match presentation ceremony after the match against Pakistan on Sunday, Sharma said, “We know how important the first 10 overs are. The chase becomes a little easier if that’s done well. The most important thing was to bat as long as possible and that’s what we did.”

The Indian opening pair ended up putting an opening partnership of 210 runs and helped the men in blue of 210 as India chased down a target of 238 with nine wickets and more than 10 overs in hand.

It is the highest opening partnership by India against Pakistan, surpassing the one made by Sachin Tendulkar and Sourav Ganguly in 1998 in Dhaka. Talking about the same, Rohit said, “Opening with Dhawan is, I don’t even need to speak to him, it’s important to let him be and we’ve batted enough to understand each other’s games.”

While chasing the target both the Indian players ended up getting centuries while Rohit crossed 7000 runs in ODI cricket. However, India’s victory was almost sealed in the first innings, The foundation of the victory was set by the efficiency of India’s bowling attack in the death overs. India conceded just 34 runs in the last seven overs of the Pakistan innings. A lot of credits for the same goes to Jasprit Bumrah, who took two wickets and conceded just 15 runs in the four overs he bowled during that period.

Talking about the same, Rohit said, “Bumrah has matured as a bowler now, has played a great amount of cricket and he understands his bowling. He understands what fields he needs to set and on a wicket like that you need to be clever, keep it tight, keep up the pressure. Bhuvneshwar too did exactly the same We never wanted to let them off the hook and our spinners have been magnificent throughout the tournament. We were playing four spinners including Jadhav. We wondered about going with three seamers, but knowing these conditions, we went with the spinners and they have been great. Jadeja too, to come back into the side and do so well.” 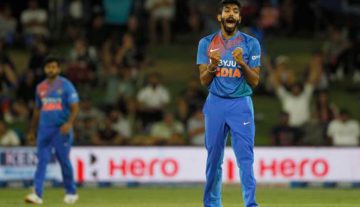