The Indian deputy skipper, Rohit Sharma is preventing himself from looking too far into the future as he feels the T20 World Cup is “still a long-long ahead” and that the focus of the team is on winning the T20I series against the West Indies. The three-match T20I between India and West Indies is currently locked at 1-1 with the decider scheduled to be held at the Wankhede Stadium in Mumbai on Wednesday.

Talking about the same, ahead of the final T20I, Rohit said, “See, I don’t want to keep saying that we are trying to build a squad for the (T20) World Cup. It is still a long long way ahead. We just need to focus on winning the series and that will keep us in a good state, moving forward. If we keep winning games, keep doing the right things on the field, the composition of the team will take care (by itself).”

India was pegged back after winning the first T20I in Hyderabad with the West Indies making a strong comeback in Thiruvananthapuram. Virat Kohli had starred with the bat in Hyderabad as he outplayed the West Indies with a whirlwind knock of 94 off 50 balls. His superlative knock helped India chase down West Indies’ formidable score of 207 for five.

However, Virat along with other big names in the Indian team failed to fire with the bat. Youngster Shivam Dube provided the spark to India’s innings with a quickfire 54 while Rishabh Pant scored 33 off 22 balls but India failed to finish strongly and was restricted to 170 for seven.

In reply, Lendl Simmons scored an unbeaten 67 off 45 balls while Nicholas Pooran smashed an 18-ball 38 as the West Indies easily reached the target with eight wickets remaining and nine balls to spare.

India’s fielding has been ordinary in the ongoing series and the bowling unit has come under immense pressure against the big-hitting West Indies batsmen.

ALSO READ: Kohli’s Tweet Of Message For Dhoni Becomes The Most Retweeted One

Talking about the same, Rohit said, “We have to be at our best when we play them. As I said, they are very unpredictable. We just got to stick to our plans and execute them to perfection. We made a few mistakes in the last game… with the bat… with the ball and on the field. We know where we lacked as a team. We just have to tighten those areas. We have to make sure those mistakes are not repeated again and again.” 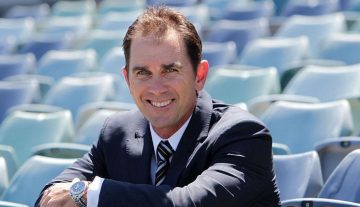 News
By CricShots - May 1, 2020
Justin Langer Aims Australia To Beat India In Their Backyard