New Zealand experienced cricketer Ross Taylor gives credit to the Indian cricketers to win the five-match ODI series at the end of the third ODI of the series on Monday (28 January). He feels that the visiting side put them under pressure for a long time by picking up wickets at the crucial moment.

After suffering two big defeats in this series, once again the host side New Zealand surrendered in the third ODI of the series on Monday at Bay Oval (Mount Maunganui). Ross Taylor and the wicketkeeper-batsman Tom Latham provided a crucial 119-run partnership for the fourth wicket to bring back the momentum for the host side, who lost their first three wickets on 59 runs on Monday morning. However, after that big partnership was broken, the host side lost their next wickets in regular intervals and was bundled out for 243 runs in 49 overs.

Taylor, who scored 93 runs off 106 balls during the third ODI, claimed that they failed to penetrate both with bat and ball.

The senior Kiwi cricketer told in the post-match press conference, “Yeah, you just got to give credit to the Indians. They have just been good in all three matches and we just haven’t been upto it, I think. Pretty honest…with bat and ball, we hadn’t been able to penetrate. We back ourselves to keep wickets in hand with the bat and we haven’t been able to do that. India were able to put us under pressure for long periods of time and got wickets at crucial periods of time.

“And New Zealand you know were three-four down with still 25 overs to go. You are still a long way to go in the match. We fought hard today but just wasn’t good enough.”

Though they have lost the series already, Taylor is focusing seriously in the last two ODIs of the series to build up a better side for the upcoming 2019 ICC Cricket World Cup.

Taylor said, “I think that is an exciting thing. We still got two games to go. Even as the series is gone, there’s still a lot of pride in the team and playing for New Zealand. Hamilton has been a good hunting ground for us as a team and obviously World Cup is not far away.”

For the last two ODIs of the series, New Zealand has made two changes in their squad as James Neesham and Todd Astle have replaced Doug Bracewell and Ish Sodhi respectively. Taylor is hopeful that the new players can bring the new side of the team.

Also read: Kohli Feels Pandya Will Come Out As A Better Cricketer After KWK Controversy

The former Kiwi captain added, “Hopefully they can bring in a new edge to the team. Yeah as I said it is tough but we have to get on in the professional sport.” 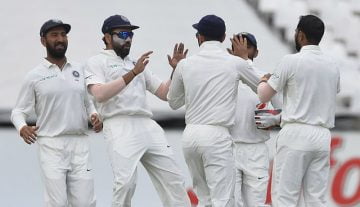 News
By CricShots - Dec 6, 2021
CSA Announces The New Schedule For Tests An ODIs Against India