Bangladesh and Pakistan locked horns with each other in the second T20I of the three-match series at the Sher E Bangla Stadium in Dhaka. However, Pakistan managed to win the first match after a brilliant performance. Bangladesh captain Mahmudullah had won the toss and decided to bat first.

But nothing went in the favor of the host as they lost early wickets. However, they somehow managed to reach the score of 127 runs and the total was not enough for the Bangladesh bowlers as Pakistan went on to register a tight win. But Pakistan batsmen too struggled to score runs on the tough pitch.

The pitch was fairly slow and rough and the hosts were hoping to do better in the second innings. Both the teams were hoping to not repeat the similar mistakes that they had done in the first T20 international match in Dhaka on Friday. But Bangladesh went on to play even worse in the second T20I.

However, Pakistan bowlers came out all guns blazing and Bangladesh could only score 108 runs in the first innings of the T20 match. The Pakistan fast bowler Shaheen Shah Afridi went on to hurt a Bangladesh batsman during his spell. Moreover, Shaheen Afridi could not digest that the Bangladesh batsmen had hit him for a huge six.

Shaheen Afridi then threw the ball unnecessarily and eventually ended up hurting the batsman. Moreover, the ball had hit the batsman on the toe and it hurt him the most. Every Pakistani cricket rushed to check on the batsman. Many are calling for strict action against the Pakistani fast bowler.

Gets hit for a 6 and Shaheen Shah loses his control next ball!

I get the aggression but this was unnecessary. It was good however that he went straight to apologize after this.#BANvPAK pic.twitter.com/PM5K9LZBiu 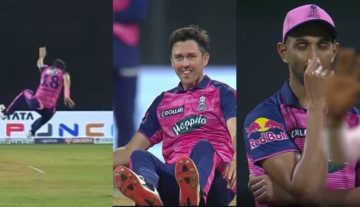 IPL 2022
By CricShots - May 2, 2022
Prasidh Krishna Accidentally Threw The Ball At Boult’s Legs And he Tripped