Pakistan’s bowling coach, Shaun Tait was not impressed with a couple of questions from journalists after Day 4 of the ongoing 2nd Test against New Zealand in Karachi. Tait was asked about the dip in performance of the Pakistan bowlers, especially pacers, in home conditions. Pakistan pacers have been struggling to take wickets at crucial junctures on flat pitches in the ongoing home season. Naseem Shah scalped just 9 wickets in 2 matches while the rest of the pace bowling attack has taken 9 over 4 Tests.

Pakistan witnessed a whitewash in a three-match series against England following which they were held to a draw by New Zealand in the first Test of a 2-match series in Karachi. Pakistan is on the verge of losing another home series, the third successive on the trot as they were reeling at 125 for 5 at Lunch on Day 5 of the 2nd Test against New Zealand, chasing 319. They were beaten 1-0 by Australia earlier in 2022.

ALSO READ: Wasim Jaffer Feels Axar Patel Can Give Ravindra Jadeja A Run For His Money

As Shaun Tait was taking questions after the fourth day’s play, the former Australia pacer faced the heat. A journalist asked: “Poor performance by Pakistan fast bowlers in the 5 Tests in home series. How can you justify their performance?” Tait side-stepped the question, saying: “That’s your opinion”.

A similar question popped up toward the end of what was a brief press conference. Another journalist backed the previous question, saying ‘poor performance’ was not just the scribe’s opinion but of the entire nation.

Shaun Tait replied by saying, “I am asking you are you satisfied with your performance as a bowling coach? You are answering your question before you ask it. You are saying that’s your opinion. You say the performances were poor. okay, that’s your opinion! What do you want me to say? Ask me the question.”

ALSO READ: Axar Patel Reveals His Intent During His 20-ball 50 Against Sri Lanka

Pakistan has also been battling with injuries to key fast bowlers. Shaheen Shah Afridi missed the 3 Tests against England and the ongoing series against New Zealand while Naseem Shah picked up an injury during the England Tests and returned only for the 2nd Test. Haris Rauf, who made his Test debut in the first Test against England, picked up an injury and has been sidelined since. 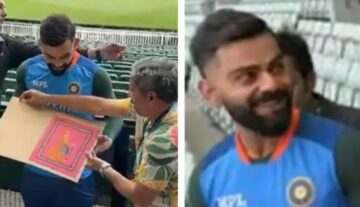 Videos
By CricShots - Nov 5, 2022
Virat Kohli Was Shocked After A Beautiful Gesture From A Veteran Journalist