After Shikhar Dhawan, Team India has suffered another major setback. The veteran Indian fast bowler, Ishant Sharma has been ruled out of the two-match Test series against New Zealand. He will now be participating in the Test series against the Kiwi due to an ankle injury.  He sustained an ankle tear during a Ranji Trophy game in New Delhi while bowling against Vidarbha.

The Test series against New Zealand is scheduled to start from February 21 in Wellington. Talking about his injury to PTI, a senior DDCA official said, “The MRI report has come. Luckily there is no fracture. There is an ankle tear. The moment he is in a position to walk, he will travel to NCA.”

Ishant was groaning in pain after the injury and walked out of the stadium with the help of paramedics. However, in the scans later it was known that he had suffered a Grade 3 tear. He was hit in the fifth over of Vidarbha’s second innings. On the short ball, opposing captain Faiz Fazal attempted to play a pull shot and Ishant slipped in the follow-through. He had to seek medical help immediately.

One of the sources in BCCI said, “It’s a Standard Operating Procedure (SOP) in BCCI as we will again do his MRI to ascertain degree of tear and decide on his rehabilitation.”

Navdeep Saini will be the replacement of Sharma, who took 3 wickets for 45 runs in Vidarbha’s first innings.

Team India will be locking horns with the Blackcaps in New Zealand for the complete tour. The tour will comprise of as many as 5 Twenty-20 Internations (T20Is), three One-Day Internationals (ODIs), and a couple of Test matches. With the Indian squad for the T20I series already announced, the ODI and Test squads are yet to be announced. 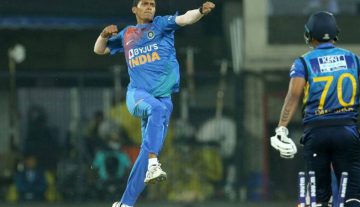