The veteran Indian opener, Shikhar Dhawan, along with his Delhi Capitals (DC) Rishabh Pant and captain Shreyas Iyer joined the DC squad in Mumbai as the franchise reunited in the city before departing for the United Arab Emirates (UAE) for the upcoming season of the Indian Premier League (IPL) 2020.

The IPL had to move out of India during the increasing cases of the coronavirus and the Board of Control for Cricket in India (BCCI) chose the UAE as the host for this year’s tournament. The Delhi-based franchise took to Twitter to announce the arrival of their star players in Mumbai. Delhi Capitals posted a picture of the opener waving at the camera.

How excited are you to see him back with the squad? 🤩#YehHaiNayiDilli pic.twitter.com/lK4KtfWokA

The southpaw has joined the rest of the squad at our Mumbai hotel 🤜🏻🤛🏻#YehHaiNayiDilli pic.twitter.com/zoySOHs2wK

Delhi finished third on the points table in the last edition of the IPL and they have added more experience to their squad for this season. Delhi also bought the services of the veteran off-spinner Ravichandran Ashwin and the Indian Test specialist, Ajinkya Rahane during the IPL 2020 auction last year during the trade window.

On Tuesday, the Delhi-based franchise announced Anrich Nortje as the replacement for Chris Woakes, who pulled out of the IPL to keep himself fit for international cricket. The T20 tournament will begin on September 19 and the final will be played on November 10.

Three teams; Kolkata Knight Riders (KKR), Kings XI Punjab (KXIP), and Rajasthan Royals (RR) landed in the UAE for IPL 2020 on Thursday. Defending champions Mumbai Indians (MI) have also reached in the UAE on Friday while SunRisers Hyderabad (SRH) is expected to leave over the weekend.

All the matches during this year’s IPL will be played across three venues of UAE – Sharjah, Abu Dhabi, and Dubai. 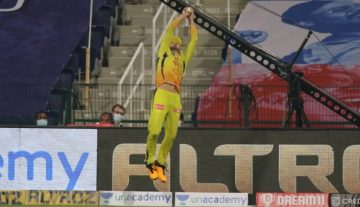