The veteran Australian cricketer, Steve Smith often been seen punishing the bowlers with his brilliant batting ability but Pakistan fast bowling superstar Shoaib Akhtar reckons that Smith has no technique. In a recent YouTube video, Shoaib expressed surprised about Smith’s effective batting, which according to him lacks technique or style.

Akhtar, who scalped as many as 247 wickets in One-day International (ODI) for Pakistan, also said that it is impossible to hurt Steve Smith and he is looking in great touch.

The fiery pacer further added, “But it’s impossible to hurt this guy (Steve Smith), he’s playing so well, he’s one of a kind. Wish him the best of luck.”

Smith played match-winning innings of 80 runs in the second T20I against Pakistan to help Australia register a convincing seven-wicket win over Pakistan. Ever since Smith has made a comeback to international cricket after serving the ban for the infamous ball-tampering scandal, he has looked in fine form and also regained his top spot in the Test rankings.

Steve Smith will be next seen in action during the third T20I against Pakistan on Friday. Currently, Pakistan is trailing the three-match T20I series 0-1, with a match to spare as the first match was washed out due to rain. Steve Smith starred with an unbeaten 80 off 51 deliveries as the hosts beat the visitors by 7 wickets in Canberra on Tuesday. 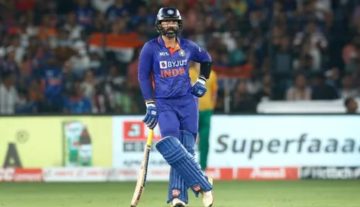