The Indian cricket team suffered the heaviest defeats in a Test series in the recent times series loss by a 1-4 margin when they lost the fifth and final Test by 118 runs to England at The Oval. The daggers were out as usual but former Indian skipper Sourav Ganguly decided to stand by Virat Kohli’s team after the huge loss and advised the captain to give his players a slightly longer rope.

Ganguly, who was known for his man-management and team-building skills, urged Virat to identify potential players and give them a time to settle down. Though he transcended as a batsman during his captaincy tenure, his captaincy has come under the scanner for changing his team far too frequently. In the 40 Tests that he has led so far, Kohli has changed his team’s playing XI on all instances except once.

During a show on India TV, Sourav said, “More than post-mortem, it is important to recognize talent here. It is important for every team to move forward. I believe that the kind of batting that the likes of Cheteshwar Pujara, Rahane and Rahul have done in this series, they are 10 times better cricketers. Kohli needs to bring the best out of his players. It is a big responsibility of a captain to take the players along as you move ahead.”

He further added, “If the captain puts his arms around a player’s shoulder and says that he wants the player to win him games, the performance will automatically improve. That atmosphere needs to be there. Identification of talent is very important.”

Known for his trusting the young players like Harbhajan Singh, Virender Sehwag and Yuvraj Singh who went on to shine for India on international stage, Ganguly also asked the national selectors to give more time to certain players who showed flashes of their talent in tough conditions.

Explaining his point further, Sourav said, “Selectors must see who are the players who make runs outside the sub-continent. They should give those players an opportunity in India. It shouldn’t be the other way round. All the big stars of Indian cricket have made runs outside the sub-continent. And if you see, a player like KL Rahul has hit centuries in both Australia and England. So, he should be given an opportunity. Yes, there should be pressure, but it shouldn’t be so much that the player breaks down. The selectors have to show this balance.”

The former skipper particularly praised KL Rahul, who had a very ordinary Test series till he hit that 149 in the second innings of the final Test at the Oval. He built a partnership of 204 runs for the sixth wicket with wicket-keeper Rishabh Pant, who also hit his first Test century, although India could not avoid a defeat because of the failure of other batsmen, including Kohli, in the innings. 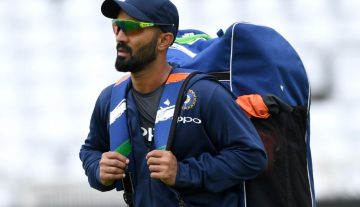