South Africa had managed to post an enormous-looking target of 297 runs in the first ODI against India at Boland Park in Paarl and the hosts won the game by 31 runs. Proteas skipper Temba Bavuma has led his team from the front as he received excellent support from the promising middle-order batter Rassie van der Dussen. Both Bavuma and van der Dussen carried out the rescue act after the hosts had lost their top-order early on and were reduced to 68/3 in the 18th over.

South African skipper and Van der Dussen accelerated the innings and also ensured there were no further hiccups. The duo’s efforts paid off and they went on to score their respective centuries. As the Proteas were in a spot of bother having lost three wickets before breaching the three-figure mark, skipper Temba Bavuma and Rassie van der Dussen took the attack on the Indian bowlers and increased the team’s scoring rate.

Temba Bavuma reached thereby driving one through the covers for a single in the 45th over. Van der Dussen on the other hand got to the three-figure score in the 48th over by flicking one to the fine-leg for a run. Nonetheless, before taking a long walk back to the pavilion, the Proteas captain and Rassie van der Dussen were involved in a 204-run stand for the fourth wicket. The hosts finished their innings at 296/4 from their 50 overs.

In reply, India got off to a brilliant start with openers KL Rahul and Shikhar Dhawan added 46 runs, but Rahul was dismissed by Aiden Markram at 12. Nevertheless, Dhawan found a potent partner in Virat Kohli, and the duo did what they are known for. Virat Kohli did look impressive as he added 94 runs alongside Shikhar Dhawan for the second wicket. Both batters even slammed half-centuries as India looked in command.

WATCH – Virat Kohli Had A Heated Altercation With Temba Bavuma

However, Kohli and Dhawan departed in quick succession as the middle-order couldn’t do much. Batting at number seven, Shardul Thakur did slam a 43-ball 50 but his efforts couldn’t only minimize the margin of defeat. India was eventually restricted to 265/8, losing the contest by 31 runs.

Here are some reactions to the win on Twitter:

Temba Bavuma and Rassie van der Dussen’s 204-run partnership propels the Proteas to a competitive total of 296-4. Both batters scored hundreds in the innings.

Hundreds for Van Der Dussen and Temba Bavuma, after losing early wickets both have played brilliantly so far. Dussen has been more aggressive and taken the game in ODIs to the different level in the last few years. 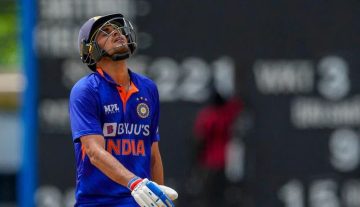