The Australian team has managed to gain a commanding position in the ongoing second Test of the three-match series against the Proteas at the MCG owing to a brilliant partnership between David Warner and Steve Smith. However, things got from bad to worse for the visitors after pacer Anrich Nortje was knocked over by Fox Sports’ ‘Flying Fox’ camera during the second session on Day 2.

South Africa’s Anrich Nortje dished out a fiery spell of fast bowling in the post-lunch session making life uncomfortable for David Warner and Steve Smith as he consistently bowled at a pace of 150kmph and more on a regular basis. Although he was not successful in dismissing either of the batters, he received a pat on the back, sort of, from the hovering camera at the venue.

The incident took place after the 47th over of the Australian innings, when Anrich Nortje was meandering towards his fielding position in the backward square region only to be knocked over by the fast-moving camera. The Protean fast bowler was checked upon by medical staff on-field to determine if he was concussed or injured in the incident. Thankfully he did not sustain any serious injuries in the mishap as the camera hit him on his back.

Meanwhile Warner has his century & Australia only two wickets down and 2 runs away from SA’s first innings total (Warner on 115 & Smith on 39) pic.twitter.com/ZafPYIJPue

The commentators were concerned about the incident and reckoned things like these should not be happening on the field. All this while the duo Warner and Smith gave room to the visitors to come back in the game as the southpaw went on to register a combative ton in his 100th Test appearance for the Aussies. The veteran opener also breached the 8000-run mark in Test cricket during his innings. He emulated Joe Root’s incredible feat of notching up a double ton in his 100th Test match. 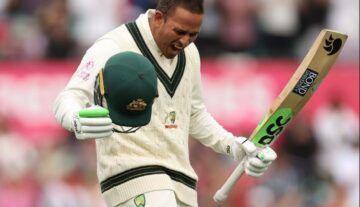