It would be a surprising thing to know that Australian bowling legend Glenn McGrath is unknowingly providing help to England ahead of the Ashes. However, he has become a case study in Stuart Broad’s quest to demolish the hosts’ batting and keep the urn in English hands.

Broad practicing day-in-day-out in order to prepare for his third Ashes tour by practicing with half a dozen Kookaburra balls, trying to imitate one of the most successful Test bowlers in the world.

As quoted in Dailymail, Broad said, “In Australia, you have to hit the pitch as hard as you possibly can. You look at McGrath and he did that consistently. I’ve been watching some YouTube videos of him bowling in Australia, visualizing how to get wickets as a tall bowler. In the past, if we’ve made a mistake in Australia it’s been to bowl too short, so you get cut and pulled off the length.”

He further elaborated, “This time, I will be making a conscious effort to bring batsmen forward, just like we did as a unit through last summer. Try to expose any movement by getting them on the front foot would be my message. Jimmy Anderson and I pride ourselves on adapting to the pitch quicker than the opening batsmen. Ryan Harris had a lot of success in Australia. How? He pitched the ball up at a good pace.”

Broad and Anderson, a new-ball duo of England have scalped 894 Test wickets together and now they work with New Zealander Shane Bond. Talking about the same, Broad said, “It’s not got as big a seam as the Dukes but it’s a nice new ball to bowl with. Our biggest challenge as a bowling unit will be that 30-to-80- over a period, so we will be practicing with older balls when we get to Australia because that’s where you win and lose Test matches. How do you change the momentum when the ball’s doing nothing? We need to find a way to do that.”

Broad has been a qualified success in Australia as he took 21 wickets in the whitewashing of four years ago while injury shortened his contribution to the 3-1 win in 2010-11. Broad recalls that once captain Joe Root reminds his team that with freedom came responsibility — immediately after they unraveled for 133 against South Africa at Trent Bridge in July.

Broad concluded by talking about the English all-rounder Ben Stokes, he said, “If Stokes is not there I don’t think anyone needs to step into that role particularly. I believe the leadership skills he has shown in the past 18 months will carry on being an influence.
He doesn’t necessarily look like that sort of character, but he’s brilliant at saying, “Don’t worry about that spell, the next one’s important”, or, “It’s not quite going your way but it will change for you”. All those sorts of things will stay within the team, as will his competitive spirit, because he’s played such an integral part in the lead-up.” 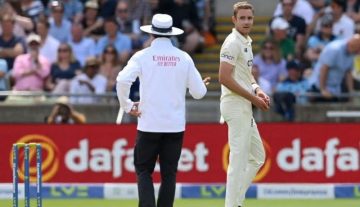