Legendary Indian cricketer, Sunil Gavaskar gas is given clarification on Friday after Bollywood actor Anushka Sharma’s post on Instagram, taking offense at what Gavaskar had said during commentary in relation to her husband Virat Kohli’s performance in the match against Kings XI Punjab (KXIP). Gavaskar said neither he blamed  Anushka Sharma for Virat’s failure nor he made any sexist remarks during his commentary stint.

While Kohli was still at the crease, Gavaskar said that the RCB skipper is keen to improve and he knows that he can do so only by practicing as much as possible. He added that during the lockdown Kohli was seen facing only Anushka’s bowling and it is showing that it did not help much.

Reacting to it, Anushka also issued a statement on her Instagram page and said that Gavaskar’s message was “distasteful”. Explaining his comments, Gavaskar had said, “Firstly, I would like to say, where am I blaming her, I’m not blaming her. I am only saying that the video showed she was bowling to Virat. Virat has only played that much bowling in this lockdown period. It is tennis ball fun game that people have to pass time during the lockdown, so that’s all, so where am I blaming her for Virat’s failures.”

Rubbing off the allegation of him making a “sexist comment”, as per the quotes in India Today, the batting legend said, “As you can hear from the commentary, Aakash was talking about the fact there has been very little chance for any proper practice in the lockdown, for everybody…that has actually shown in rustiness of some of the players in their first matches. Anushka was bowling to him, so that’s what I said, that’s the only bowling, I have not used any other word.”

He further added, “She was bowling to him, that’s all, where am I blaming her, where I am being sexist in this. I’m just only stating what was seen on the video which was maybe recorded by somebody in the neighboring buildings, but the point I’m making trying to make is that there was no practice for anybody including Virat in the lockdown.” 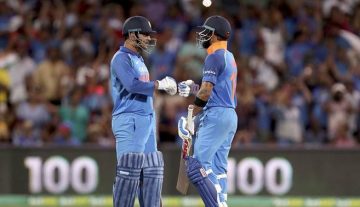