Recently, there have been a plethora of discussions regarding the India-Pakistan World Cup tie and now, the legendary Indian cricketer, Sunil Gavaskar has opined about the issue by stating that India can try throwing Pakistan out of the tournament but it will not work.

All these reactions are coming as an aftermath of the Pulwama attack that claimed the lives of 40 CRPF troopers. The Indian people are in deep shock and anguish ever since and voices from the cricketing fraternity have also gone on to not support the tie. Harbhajan and Sourav had earlier said that India should not play Pakistan in the World Cup.

During a recent interview on India Today, Gavaskar said, “It will not happen because the other member countries have to accept that. I can’t see other member countries accepting that. India can go ahead and try to do that [stop Pakistan playing the World Cup]. Pushing for boycotting Pakistan in the World Cup won’t work, other countries won’t agree. And if we don’t play them in the WC, we are the losers. Play them and defeat them is the best way.”

Meanwhile, COA will be meeting with BCCI to discuss the future course of action. Seeking advice from the Sports Ministry, MEA & Home Ministry. BCCI/COA will take a collective and responsible decision as to what steps can be taken in regards to cricket with Pakistan. No letter has been written to ICC yet regarding the same.

Describing the same, ICC CEO David Richardson said, “There is no indication that any World Cup match will not go ahead as planned. Sport, in particular, cricket, has the wonderful ability to bring people together and unite communities. We will work with our members on that basis.”

Many cricketers, including the likes of Harbhajan, has mentioned that India shouldn’t have any cricketing ties with Pakistan. In the meantime, Gavaskar has refrained from commenting on those words by the Indian off-spinner. Moreover, he also asked Imran Khan, the Prime Minister of Pakistan, to take the first step towards peace between the two nations.

Questioning Imran Khan, Gavaskar said, “I don’t want to react to what these young players have suggested but if I may speak directly – Imran, when you took over, you said it was going to be a new Pakistan. You said India should take one step and Pakistan will take two steps. I want to say that Pakistan should be the one to take the first step. You ensure that those in Pakistan creating problems – maybe to the United Nations. You take those two friendly steps and then see the many steps India will take. I am no politician. You take that first step, and then see the number of friendly steps India will take.”

When India lifted their maiden World Cup in 1983, Gavaskar was the part of that squad and maybe that is the reason he feels that calling off the World Cup match between India and Pakistan won’t do any good to the tournament. He rather remarked beating their arch-rivals in the mega event should be the way forward. The marquee encounter is scheduled to be played on Sunday, June 16 at the Old Trafford in Manchester.

The batting legend said, “I know India is strong enough to qualify by not playing Pakistan. Not playing bilaterally hurts them. But it’s a World Cup, it’s two points.”

Former Indian cricketer Mohammad Azharuddin also went down the memory lane and talked about India’s match against Pakistan in the 1999 World Cup amidst the tensions of the Kargil War.

Azhar said, “There was tension…there was the war on. We were scared the spectators would start fighting. When we won, the soldiers celebrated. If you play Pakistan, play everywhere. Otherwise, don’t play them anywhere. ICC and BCCI should resolve this quickly.” 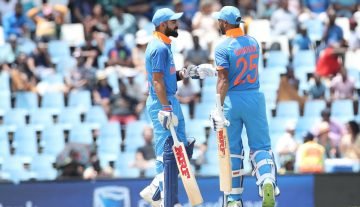