There were mixed reactions about the young Indian batter, Ayush Badoni doing a fist-pump when he smashed that winning six against the Delhi Capitals. A few believed that he was getting arrogant, while others had to believe that it was just a mere expression of happiness that made him do that.

However, there aren’t a lot of people in this world who are aware of the backstory of Ayush Badoni, the latest Lucknow sensation who has been doing ripples in the fabric of Indian cricket as the newcomers to the tournament have been in electric form.

In the IPL opener, Ayush Badoni played a match-winning knock of 54 while against Super Kings he stayed unbeaten for 19, guiding the Giants home emphatically in an exquisite high-octane run-fest where the youngster took just 9 balls to score those crucial runs, helping the Giants to register their first win of the season. The following game saw Ayush Badoni falling short but he contributed 19 runs nevertheless.

However, on Thursday against the Capitals, he came out when Deepak Hooda had fallen to Shardul Thakur and somehow the needed 5 runs seemed like an elusive task given the unpredictable nature of the surface. However, the youngster Ayush seemed absolutely fearless ahead Shardul Thakur and smashed him for a couple of boundaries that sealed the fate of the game.

ALSO READ: Ravi Shastri feels Jasprit Bumrah has to be used in a better way

This was followed by his aggressive fist pump that left the nation split into two factions. However, a Twitter user actually shed some light on Ayush Badoni’s celebrations, as he cited, “Ayush Badoni was asked to clear 3 levels of trials by @DelhiCapitals scouts. The last one was during the 3rd wave in Mumbai. He smacked 50 in less than 20 balls in each of them. Then they didn’t even bid. The fist pump after killing the game said it all. #LSGvsDC #IPL2022.”

#AyushBadoni was asked to clear 3 levels of trials by @DelhiCapitals scouts. Last one during the 3rd wave in Mumbai. He smacked 50 in less than 20 balls in each of them. Then they didn't even bid.
The fist pump after killing the game said it all. #LSGvsDC #IPL2022 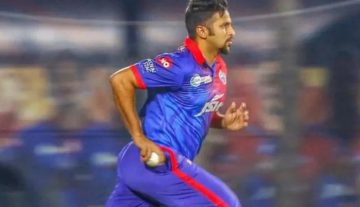