Australia have outplayed India in all the three departments without even breaking much of a sweat in the first of the three-match ODI series to take a 1-0 lead at the Wankhede Stadium in Mumbai. Their bowlers were simply fantastic before the Aussie openers, David Warner and skipper Aaron Finch scoring centuries during the chase. The visitors have begun their short tour to India with a thumping 10-wicket win which left the men in blue with a lot of questions to which they need to find teh answers to as soon as possible.

India played both KL Rahul and Shikhar Dhawan and the move backfired. The Indian team had a decent start despite losing Rohit Sharma early. Rahul (47) and Dhawan (74) stitched a 121-run partnership for the second wicket, but nothing went India’s way after Rahul’s dismissal in the 28th over and all hell broke loose for the hosts. India slipped from being comfortably placed at 134/1 to 165/5 in a matter of 35 balls.

ALSO READ: The Reason Behind Kl Rahul Keeping Wickets In The Mumbai ODI

Virat Kohli walked in to bat at four but he was cleverly foxed by Adam Zampa after scoring only 16 runs. Just before Shreyas Iyer’s rare failure lead to Rishabh Pant and Ravindra Jadeja rebuilding the innings in the 33rd over. The duo did well to stitch a 49-run partnership for the 6th wicket. But Pat Cummins came back for a spell to dismiss Pant and soon Jadeja fell.

Whenever India seemed to be gaining some momentum, Australia managed to get a wicket and eventually the home side could only post 255 runs. Mitchell Starc was the pick of the bowlers as he returning with impressive figures of 3/56 as Cummins and Kane Richardson picked a couple of wickets each.

With only 255 runs on the board, India needed some quick wickets, but they not even managed to take one as Warner got a lifeline in Shardul Thaur’s first over an then what followed was absolute dominance from the visitors. Both Finch and Warner didn’t give any chance to the opposition and played their shots fearlessly. It was goof wake-up call for India who was on a winning spree during their home season.

The Aussie openers completed their respective centuries and eventually, Australia completed the chase in the 38th over of the innings and won the match by 10 wickets. While Warner remained unbeaten on 128 with 17 fours and three sixes, Finch scored an unbeaten 110 with 13 fours and a couple of sixes to his name. With the second ODI set to be played on another belter in Rajkot, the visitors will be eager to seal the series while India will have to improve a lot to make a comeback.

Total domination by the Aussies at Wankhede today.. Great innings @AaronFinch5 @davidwarner31 congratulations @CricketAus I am sure our boys in blue will come back stronger in Rajkot #INDvAUS #realchallange

Australia have been magnificent. With bat, and especially with ball. For India, a game to forget.

Dunno about batting at three, but after this defeat, Kohli could well bat on top.#IndvsAus

Excellent day for Australia. Came back after Rahul Dhawan stand and bowled very well. Then superb batting and had all luck they would need. Finch to Kuldeep could have been out 8 times. This is sport: you cant anything for granted. Indian bowling not taking 1 wicket is proof.

The way India have bowled, Australia could have chased down anything. Proper outclassed, completely outplayed. PLENTY to think for Kohli and co. Windies scared, Australia are screaming in the face with the game

Highest targets chased down without losing a wkt (ODI)

This is the first ever instance of both the openers scoring a century in a same innings while chasing against India in ODIs. #INDvAUS

what a victory by #Australia Really Appreciated..even in sophisticated Ground You both @Davidwarner & #Finch played Well !!#INDvsAUS

This is only the 2nd time in history that India has lost an ODI at home by 10 wickets. The only other occasion was in 2005 versus South Africa in Kolkata #INDvsAUS #Cricket

Australia's 258/0 is the second highest ODI total in a 10-wicket run chase!#IndvAus 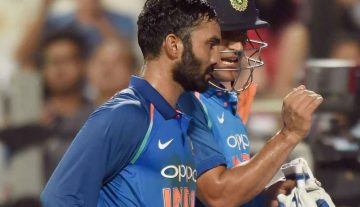