Windies opener Chris Gayle, who is a self-proclaimed ‘Universe Boss’ has always been known for his big hitting capabilities and entertaining brand of cricket.

During the 5th and the final ODI between, Windies and England Gayle once again demonstrated that why he is one of the most ferocious hitters of the cricket ball in the world.

In recent times, Chris has been regularly criticized for his slow start in the innings and even in the 5th ODI, he started slowly as he was at 5 runs in 20 balls. But, after that that in the 5th over of the first innings, he went for three back-to-back sixes in the last three balls of the overs. Again in the 7th over when he got the strike, he smashed a six then four followed by another big one and reach a score of 39 in 26 balls.

On both the occasions, English pacer Jake Ball was at the receiving end of the Gayle storm and now it had become an unforgettable day for the young pacer. However, the ‘Universe Boss’ was dismissed in the 8th over by Tom Curran and Jake ball must have had a sigh of relief after that.

It was an entertaining 6 balls from Gayle as he went for 4 back-to-back sixes followed by a 4 and a six again. Twitterati got another reason to stretch their fingers and they didn’t fall back from doing so. Here are some amusing tweets which came after the Gayle storm:

Never get bored of watching Chris Gayle hitting sixes, but what a catch from Liam Plunkett, absolute beauty. #Athlete 💪🏽💪🏽 #EngVsWI

4 sixes in a row! Off the mark on 15th ball and now 5 sixes and 1 four against J Ball by Universe Boss Gayle!Incredible batting!#ENGvWI 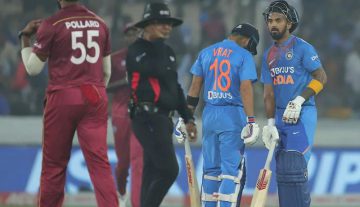