Umpiring has always been one of the most challenging jobs as the on-field officials need to take some crucial calls in split seconds. An umpire needs to be very accurate while taking an LBW and caught behind call as one wrong call change impacts the course of the game. Not to forget, the umpires also need to tackle the pressure made by the appeal of the fielding team.

Interestingly, umpires usually get a lot of limelight when they commit a blunder while making decisions and not when they have a good day at the field. While these actions are pretty simple, some umpires have different ways to convey their decisions.

ALSO READ: India Registers Their Biggest Ever Win In Terms Of Runs In Test Cricket


Who can forget how former veteran umpire Billy Bowden used to make his calls? Meanwhile, in a video, which has been going viral on social media, an umpire can be seen making his decisions in a never-seen manner.

The viral video is from Maharashtra’s local cricket tournament, Purandar Premier League, where an innovative style of umpiring was pretty evident, that took a lot of people on social media by surprise. While umpires usually spread their hands sideways to signal a wide, this umpire in the Purandar Premier League used his legs to do spo.

In the video, one can see how the umpire goes near the camera before spreading his legs and performing an outstanding headstand to make his decision. Social media users could not believe what they saw as the hilarious clip became the talk of the town. Here is the video of the same:

Surely we need to see this chap join the ICC Elite panel .. 👍🙌🙌 pic.twitter.com/FcugJBgOEn

Meanwhile, the umpires have bagged a lot of limelight in the ongoing Test series between India and New Zealand. During the opening day of the second Test, Indian skipper Virat Kohli has adjudged LBW out for a duck. The replay showed there’s a clear deviation after the ball went past the bat. Interestingly, the decision was even referred to the third umpire Virender Sharma. However, to everyone’s surprise, the official didn’t overturn the decision. 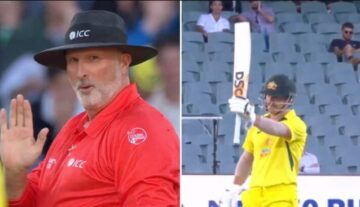