The stars of Indian women’s cricket Veda Krishnamurthy, Smriti Mandhana, and Jhulan Goswami were seen shaking a leg in the youth of New Delhi at India Today Mind Rocks 2017.

However, Veda also showcased her dancing moves along with skipper Mithali Raj during the Women’s World Cup 2017. While Harmanpreet Kaur was smashing the Australian bowlers all over the park, Veda and Raj were flaunting their moves to entertain the fans off the field.

This time during the Mind Rocks 2017, organized by India Today, Krishnamurthy, one of the batting stalwarts of the team danced with her teammate Mandhana.

According to the India Today’s reports, Veda also shared the reason for her colored hair when asked by the senior journalist Rajdeep Sardesai. She said, “It’s not taboo to color your hair, I change it before every tournament.”

While signaling towards Smriti and Jhulan, Sardesai asked, “What about you two? Do you color your hair as well?” They both laugh, shaking their heads. “It’s not my scene,” smiles Mandhana.

Here is the video of Veda’s dance: 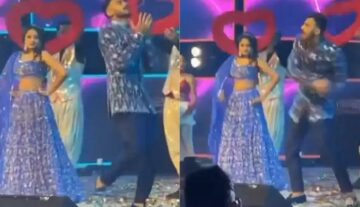