The Indian skipper, Virat Kohli registered an unwanted record as a captain after India suffered a humiliating loss by 10 wickets to Australia in the first One-Day International (ODI) of the three-match series on Tuesday. Virat became the first Indian captain to record 10-wicket loss against Australia in ODIs.

In ODIs, India had previously suffered a 10-wicket defeat to New Zealand (1981), West Indies (1997), South Africa (2000) and South Africa (2005). With the loss, India also conceded a 0-1 lead to Australia in the three-match series. However, the hosts will have a chance to make a comeback in the second ODI in Rajkot.

In the series opener, the Australian captain Aaron Finch and his opening partner, David Warner hit brilliant centuries to forge the highest Australian partnership against India as they chased down 256 runs without losing a wicket and 12.2 overs to spare.

After being asked to bat, India made a slow start to their innings after losing Rohit Sharma early. Kohli’s idea to step down the order also did not pay off as he was dismissed after scoring just 16 runs by Adam Zampa. At a moment, India did not look like crossing the 250-run mark, however, just before Shreyas Iyer’s rare failure lead to Rishabh Pant and Ravindra Jadeja rebuilding the innings in the 33rd over. The duo did well to stitch a 49-run partnership for the 6th wicket. But Pat Cummins came back for a spell to dismiss Pant and soon Jadeja fell.

Whenever India seemed to be gaining some momentum, Australia managed to get a wicket and eventually the home side could only post 255 runs. Mitchell Starc was the pick of the bowlers as he returning with impressive figures of 3/56 as Cummins and Kane Richardson picked a couple of wickets each.

In the second ODI, Virat Kohli will be looking to make some apt changes in the playing XI, in search of a series-saving victory. The series will conclude in Bengaluru on January 19. 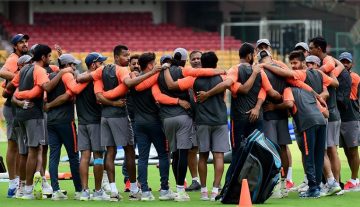