The historic Test match for Afghanistan team has become a memorable one for Team India as well as they registered their biggest margin of victory in the history of Test cricket as they defeated the visitors by a margin of innings and 262 runs. It has happened for the first time that the Indian team has finished the longest format game within 2 days. However, the flattening reality of being bowled out twice in a day – only India and Zimbabwe had done that before – having only risen as a team up to this point, will take a while to get over.

On Thursday morning, Afghanistan became the 12th Test members when their captain Asghar Stanikzai came to toss but lost and had to bowl first. Both the Indian openers scored centuries in the first innings. Shikhar Dhawan played the smashing knock of 107 runs off 96 balls while Murali Vijay scored 105 runs off 153 balls. Also, the no.3 batsman KL Rahul scored 54 runs.

Finally, India was bowled out for 474 runs during the first session on day 2. Pacer Yamin Ahmadzai, who delivered the first ball for Afghanistan in their Test cricket history as well as Afghanistan’s first Test wicket-taker, took the most wickets as his bowling figure was 19-7-51-3.

In reply, Afghanistan was bundled out for just 109 runs in their first ever Test innings. Only Mohammad Nabi (24 runs) reached the 20-run mark in that innings. Indian off-spinner Ravichandran Ashwin (4/27) picked up 4 wickets in that innings, while Ishant Sharma (2/28) and Ravindra Jadeja (2/18) scalped two wickets each and Umesh Yadav (1/18) completed his 100th Test wicket by claiming one wicket.

Having a big 365-run lead at the end of the first innings fight, India forced the new Test team for the follow-on. This time the Afghan team was bundled out for just 103 runs. Only Hashmatullah Shahidi (36 runs) and the skipper Asghar Stanikzai (25 runs) reached the 20-run mark. This time, Ravindra Jadeja (4/17) earned four wickets while Umesh Yadav (3/26), Ishant Sharma (2/17) and Ravichandran Ashwin (1/32) claimed three, two and one wickets respectively.

At the end of the game, Shikhar Dhawan won the Player of the Match award.

Finally, it was the hosts, who lifted the trophy and Rahane extended his unbeaten captaincy stretch to a whole two Tests, he even called out to Stanikzai and now Afghanistan to pose for a group photo that’s going down in the annals of their cricketing history. It was a great gesture from the Indian skipper as he put the spirit of the game in front of the competition in the sport.

Watch the video of the same here: 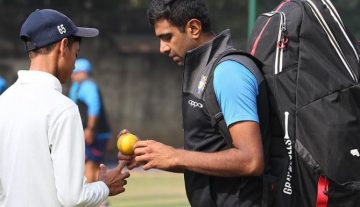