Currently, the Rajasthan Royals (RR) are locking horns with Mumbai Indians (MI) at the Sawai Mansingh Stadium in Jaipur for the second time in the ongoing season of the Indian Premier League (IPL). After winning the toss, the RR skipper, Steve Smith asked the visitors to bat first. However, the visitors lost their skipper, Rohit Sharma in the third over of the match itself.

During the toss, the MI skipper revealed that they have made just one change to their squad as Mayank Markande came in the squad for Jayant Yadav. However, RR made as many as three changes to their squad as Steven Smith, Ben Stokes and Riyan Parag came back in the squad in place of Jos Buttler, Ish Sodhi, and Rahul Tripathi.

Rohit was dismissed by Shreyas Gopal in the third over, after his dismissal, Quinton de Kock along with Surya Kumar Yadav added 97 runs for the second wicket before the latter getting out in the 14th over by Stuart Binny. Even in the very next over De Kock was also got out and again the bowler was Gopal. Hardik Pandya and Kieron Pollard were batting at the crease and the 17th over turned out to be an eventful one and Jaydev Unadkat had the last laugh as he dismissed Pollard.

On the third ball of the over, Hardik’s catch was dropped by Jofra Archer as he delivered a ball in the slot and the batsman went for a big one as he cleared his front leg and went for it, but it’s the slower cutter and Pandya failed to time it. Archer comes in off the deep midwicket boundary, slides forward and gets his hands under the ball, but can’t managed to grab the ball. On the very next ball, Pollard smashed the Unadkat for a six over the midwicket boundary.

However, Unadkat took his revenge as he clean bowled Pollard on the very next ball. He delivered slower cutter towards at middle stump and Pollard attempted another big hit, but he ended up playing early, creating a big gap for the ball to barge through on to the stumps.

Here is the video of the turn of events: 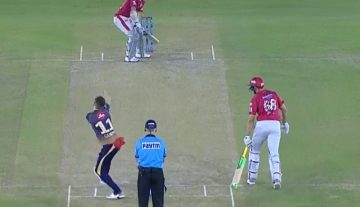