The Indian skipper, Virat Kohli was seen imitating the bowling action of teh veteran Indian spinner, Harbhajan Singh almost to perfection before the start of play in the second T20I against Sri Lanka at Holkar Cricket Stadium in Indore on Tuesday. During the warm-ups, Virat was bowling in the nets and that is when he mimicked Harbhajan’s bowling action, much to the delight of fans present at the venue.

Kohli then again imitated Harbhajan’s action right in front of the spinner, who was present on the ground as an expert for the host broadcasters. The two shared a hearty laugh and even hugged each other afterward.

Here is the video of Kohli imitating Harbhajan’s action:

In the match, both the teams opted for the same playing XI that they had named in Guwahati. After being asked to bat first by Virat, Sri Lanka was off to a decent start, scoring runs at a brisk pace. During the toss, Kohli said, “Pretty good wicket to bat, but in the first half, there could be some swing and nip around. It’s a brilliant batting track.”

While bowling first, all the India bowlers fired as Shardul Thakur scalped 3 wickets, Kuldeep Yadav and Navdeep Saini scalped a couple of wickets each while, Jasprit Bumrah and Washington Sundar scalped a wicket each. The hosts restricted the visitors to a meager total fo 142/9 in their quota of 20 overs.

India chased won the total with 7 wickets in hand and 15 balls to spare. Virat finished the things off in style by smashing Lahiru Kumara for a six over the fine-leg boundary.

The third and final T20I will be played in Pune on Friday. 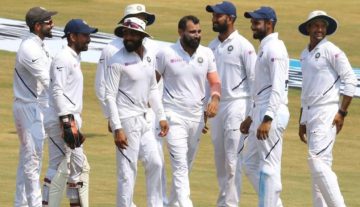