During the chase, the KKR openers Chris Lynn and Sunil Narine gave them a fiery start as they smashed 36 runs in the first three overs itself. However, on the first two bowls of the 4th over bowled by Dhawan Kulkarni, both the openers got a lifeline each.

On the first ball of the over, Kulkarni bowled a slower on to Narine, who went for an aerial shot towards long-off but ended to smashing it to backward point as the ball went very high. Despite the opportunity, Rahul Tripathi dropped the catch although he came under the ball quite early.

Lynn was on strike the next ball, and this time Kulkarni cramped the batsman by bowling a length ball and the ball took the inside edge on to the stumps, and the lights got lit but the bails don’t dislodge, and to adding insult to the injury, the ball went for a boundary towards the fine leg boundary. The irony was that even Lynn had started walking, but later on, he got to know that he has been saved by his luck. 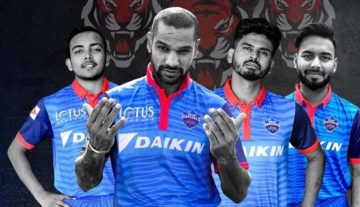 News
By Aditya Pratap - Mar 18, 2019
Dhawan believes, Indian batsmen Need To Do Well For Delhi To Win The IPL