During the toss, the KXIP skipper, R Ashwin revealed that they have made two changes to their squad as Sam Curran, Andrew Tye,  and Sarfaraz Khan made way for Arshdeep Singh, Mujeeb Ur Rehman, and David Miller. On the other hand, RR also had three changes in their squad as Steve Smith, Liam Livingston, and Krishnappa Gowtham made way for Ashton Turner, Stuart Binny, and Ish Sodhi.

During their partnership, Rahul, who started very cautiously decided to take on the bowlers in the 14th over when he and Miller smashed Sodhi for one six each. On the third ball of the over, it was a half-tracker along with plenty of widths and Rahul smocked it all the way towards the square leg boundary for huge six.

ALSO READ: Ambati Rayudu Takes A Slight Dig At BCCI For Excluding Him

Again, on the penultimate ball of the over, Sodhi again bowled the short ball and Miller easily thumped it with his flat-bat down the ground for another six.

Here is the video of the shots: 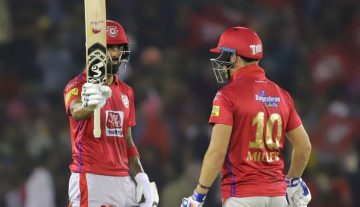 Article
By Shruti - Dec 8, 2019
KL Rahul set to be named Kings XI Punjab captain for the next IPL: Reports