In the recently concluded 12th edition of the Indian Premier League (IPL), the veteran all-rounder, Shane Watson had a rough outing. Before the Chennai Super Kings (CSK) reaching the playoffs of the tournament, he had played just one substantial knock of 96 against the Sunrisers Hyderabad (SRH) at the MA Chidambaram Stadium in Chennai. Apart from that, the Queenslander was nothing but a failure for the defending champions.

However, the veteran started churning out some match-winning knocks in the qualifier and the final as well. He scored a half-century versus the Delhi Capitals (DC) in Visakhapatnam in the second Qualifier to help his team reach the final and then in the Final, he converted his patient start into a marvelous 80 off 59 deliveries with eight boundaries and four over-boundaries while chasing a target of 150.

Despite his herculean task, CSK ended up losing the game against the Mumbai Indians (MI) by just one run and Rohit Sharma’s team lifted the trophy for a record fourth time. After the final, Harbhajan Singh, Watson’s teammate in CSK shared a story on Instagram where it can be seen that Shane’s left trouser was stained with a significant amount of blood.

He revealed that the veteran all-rounder didn’t tell anyone about the injury and kept of batting. Later he got as many as six stitches on his knee. In his story, Harbhajan mentioned, “Can you guys see the blood on his knee.. He got 6 stitches after the game..Got injured while diving but continue to bat without telling anyone”.

As the tournament been concluded, Watson would be a tad dejected as he couldn’t take his team over the line in the Final. Recently, he retired from the Big Bash League (BBL) cricket and hence, won’t be playing much of cricket in the next few months. Meanwhile, a video is doing the rounds on social media where Watson can be seen limping.  He seemed pretty conscious about the landing of the injured leg.

Here is the video of Shane Watson hobbling: 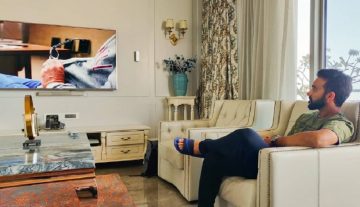 News
By CricShots - May 10, 2019
Ajinkya Rahane Gets Trolled By Shikhar Dhawan On Instagram