In recent times, the English all-rounder, Ben Stokes has emerged as the most versatile cricketer around the world. From his match-winning knocks the World Cup 2019 and his Ashes heroics later in the year, Stokes has proved his mettle across formats, and it has helped him to witness significant gains in ICC rankings, especially in Test cricket. Apart from posting the big scores and breaking partnerships, Stokes has also been known for his commitment and athleticism on the field.

It was his determination and commitment that on the final day of England’s must-win second Test against West Indies. After scoring a brilliant 176 in the first innings, Ben Stokes played a quickfire knock of 78 off just 57 deliveries in England’s second innings as they declared early on Day 5 and set West Indies a target of 312 to win.

After a few early wickets, a solid partnership between Shamarh Brooks and Jermaine Blackwood was looking threatening for England. In the first delivery of the 43rd over, Stokes delivered short of a good length ball to Blackwood and the batsman punched it back down the ground. With no fielder there, the English all-rounder decided to chase it down himself and dove to stop the ball from crossing the line.

Here is the video of the amazing effort:

And there is Ben Stokes' idea of commitment.

Stokes’ heroics went slightly in vain, as the batsmen had managed to run four between the wickets, but it was an exemplary effort and showed his never-ending commitment for the team.

Three deliveries later, Stokes went on to dismiss Blackwood, and with Shane Dowrich falling to Chris Woakes in the next over, West Indies’ chances of winning the match drowned further, with England eventually bundled them out for 198 and claiming a 113-run victory to level the series.

Ben Stokes received the man-of-the-match award for his brilliant performance in the match, and he also reached the numero uno position in the ICC Test rankings for all-rounders, while moving to third among batsmen, behind just Australia’s Steve Smith and the Indian skipper, Virat Kohli. 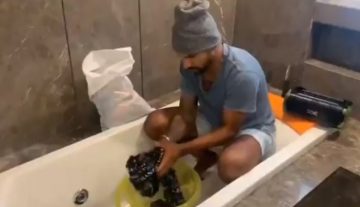