It was on March 24, 2011, when the veteran Indian all-rounder, Yuvraj Singh was too hot to handle for Australia as he crashed their hopes of winning fourth consecutive World Cup title. In the quarterfinals of the premier tournament, India defeated Australia by five wickets at the Sardar Patel Stadium in Ahmedabad.

This was India’s first World Cup win over Australia in 24 years. Before this match, Australia had defeated India five consecutive times in the ODI World Cups. In the quarter-final of the showpiece event, defending champions Australia put on 260/6 on the board in their quota of 50 overs owing to a brilliant century of Ricky Ponting (104) and Yuvraj took crucial wickets of Brad Haddin and Micael Clarke.

Chasing a decent total of 261, India had a modest start as openers Virender Sehwag and Sachin Tendulkar added 44 runs for the first wicket. However, Sehwag (15) got out in the ninth over. Sachin built forward India’s innings with Gautam Gambhir as they added 50 runs for the second wicket. Both Tendulkar (53) and Gambhir (50) played cautiously and hit half-centuries before getting out.

During the chase, India kept losing wickets at regular intervals. However, Yuvraj and Suresh Raina’s (34 not out) 74-run partnership helped India to go over the line with 14 balls to spare. Yuvraj played an unbeaten knock of 57 runs of 65 balls. He smashed eight fours, including the winning boundary.

The 2011 World Cup was memorable for Yuvraj as was named as the ‘Player of the Tournament’ for his all-round performance. He scored 362 runs and took 15 wickets in the tournament. India faced Pakistan in the semi-final followed by Sri Lanka in the final whom they beat by 6 wickets at the iconic Wankhede Stadium in Mumbai.

Here are the highlights of the match: 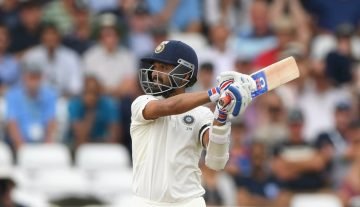