The sixth edition of the Tamil Nadu Premier League (TNPL) commenced on Thursday night with a dramatic game between defending champions Chennai Super Gillies (CSG) and the Nellai Royal Kings (NRK). The match was tied and the Royal Kings managed to win the game in the Super Over, with the side chasing a 10-run target with a ball to spare.

Earlier, defending champions Chennai were given a 185-run target, and with five required to win on the final ball, S Harish Kumar smashed a four against V Athisayaraj Davidson to force a tie. However, the Super Over wasn’t the only dramatic aspect of last night’s game at Tirunelveli.

During the run-chase, tempers flared after CSG wicket-keeper batter and senior Tamil Nadu cricketer, Narayan Jagadeesan was ‘Mankaded’ by Baba Aparajith. Jagadeesan had made a strong start to his innings and the sudden dismissal left the batter fuming,  as he made obscene middle-finger gestures, seemingly towards the NRK players while walking towards the dugout.

N Jagadeesan has represented Tamil Nadu in 26 first-class, 36 List A, and 45 T20 matches, and it is likely that action will be taken against him for making the gesture. Additionally, the wicket-keeper batter is also a part of the Indian Premier League (IPL) franchise Chennai Super Kings (CSK) since 2018, and he played a couple of matches fin the recently-concluded edition of the tournament.

Earlier in the game, NRK opener Laxmesha Suryaprakash (62) and Sanjay Yadav (87*) were the crucial performers with the bat to take the Royal Kings to a strong score of 184/4 in 20 overs.

Super Gillies skipper, Kaushik Gandhi (64) top-scored for the side, and even as S Harish Kumar (26* off 12 balls) produced a strong performance in the final overs, the side could only level the score before eventually going down in the Super Over. 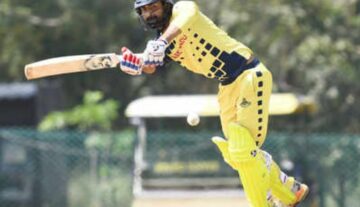