Former India opener Gautam Gambhir praised India’s T20I skipper, Rohit Sharma saying the latter did not get bogged down by the pressure of being the full-time captain and he batted with a lot of freedom in the T20I series against New Zealand. Gambhir said Rohit showcased a lot of maturity in the way he batted as the opener in India’s 3-0 sweep of the Black Caps.

Rohit Sharma topped the run-getter as he amassed 159 runs in 3 matches at a strike rate of over 150 in his first full-time series as T20I captain. Rohit went from the word go and it was evident with the way he hit a 31-ball 56 against New Zealand in the 3rd T20I in Kolkata. Rohit hit 3 sixes and 5 boundaries as India posted 184 after opting to bat, going against the norm of winning the toss and bowling on a dewy evening in Kolkata.

ALSO READ: Adam Zampa Takes A Dig Wade And Puts His Gloves At A Sale

During a recent chat on Star Sports, Gautam Gambhir said, “He has done it (scoring big) year after year. It’s good that it’s coming while he is the full-time captain. Because sometimes captaincy can take the freedom out of your game but it didn’t happen with Rohit. Yes, he has captained previously as well but wasn’t the full-time captain. This series showed his maturity and what he has done in this series is no surprise.”

Rohit Sharma took over as T20I captain from Virat Kohli who decided to resign from the role after India’s early T20 World Cup exit. While Gambhir said the series whitewash of New Zealand can’t be seen as India’s bounce back from the World Cup disappointment, he heaped praise on Rohit’s captaincy.

Gautam Gambhir said Rohit’s moves to bring in the spinners early in the 3rd T20I while defending a total in Kolkata show his maturity as a leader and his ability to stay ahead of the game.

Explaining the same, Gautam Gambhir said, “Very, very good captaincy from Rohit Sharma. Bringing on Axar Patel in the 3rd over and getting Yuzvendra Chahal in the 4th over. These are small, small things, sometimes, you might just miss. He is someone who won 5 titles in the IPL and now he has started off this series with a clean sweep. So this is what captaincy does in T20I cricket.”

Rohit will not be part of the upcoming 2-match Test series against New Zealand as the star batter has been rested after a busy season of T20I cricket. 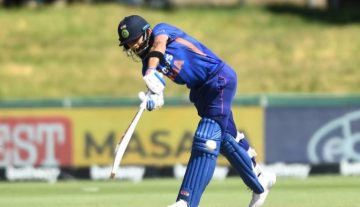