Indian skipper Virat Kohli swept the top honors at the ICC Awards 2017, he won the Sir Garfield Sobers Trophy after being adjudged the ICC Cricketer of the Year and ICC ODI Cricketer of the Year. Kohli was also named the captain of both the Test as well as the ODI team of the year.

Thanking ICC for the award, Virat said, “It means a lot to win to win the Sir Garfield Sobers Trophy for becoming the ICC Cricketer of the Year 2017 and also the ICC ODI Player of the Year. I won that back in 2012 also but it’s the first time winning the Garfield Sobers Trophy, and it’s a huge honor for me. It’s probably the biggest of all in world cricket and two Indians getting it back-to-back makes it more special.”

He further added, “Last time it was Ash [Ravichandran Ashwin] and this time I’m getting it, so I’m really really honored and I’d like to thank the ICC for recognizing all the hard work that we all put in for our respective sides and I want to congratulate all the other winners also.”

On the other hand, Smith scored an astonishing 1875 runs at an average of 78.12 in the 16 Tests he played in that duration, including eight centuries and another five half-centuries. “It’s a great honor to win the Test Player of the Year award. “It’s called Test cricket for a reason and I’m very humbled to win that award. I’ve had a really good year – I think I’ve scored six centuries in the year and more importantly led the team to an Ashes victory, which is something that is really important to me. I am incredibly humbled and I love playing Test cricket – it’s the game that challenges your skills and your mind the most.”

Pakistan’s Hasan Ali was named ICC’s Emerging Player of the Year while Afghanistan’s merging spinner Rashid Khan took home the ICC Associate Cricketer of the Year award. Hasan’s 3 for 19 played a vital role in Pakistan’s Champions Trophy win against India. on the other hand, Rashid had picked 60 wickets for Afghanistan in 2017 – a record for an Associate player in a calendar year.

Marais Erasmus, for the second year in succession, was awarded the ICC Umpire of the Year. He joined ICC’s Elite Panel in 2010 and has umpired in 47 Tests and 74 ODIs, including the Champions Trophy final, and 26 T20Is.

Pakistan’s Champions Trophy win in England has won the inaugural award of ICC Fans’ Moment of the Year. They outplayed the arch-rivals India in the title clash to bag their first ICC trophy since 2009.

Yuzvendra Chahal’s 6 for 25 against England in Bangalore last year has been recognized by the international cricket board as the T20I Performance of the Year. 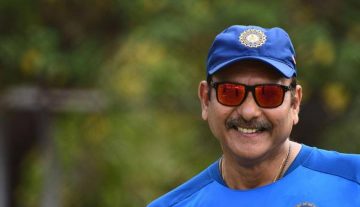 Social Shots
By CricShots - Apr 15, 2020
Ravi Shastri Has His Quirky Take On Fight Against Coronavirus