The historic Test match for Afghanistan team has become a memorable one for Team India as well as they registered their biggest margin of victory in the history of Test cricket as they defeated the visitors by a margin of innings and 262 runs. It has happened for the first time that the Indian team has finished a Test match within 2 days. However, the flattening reality of being bowled out twice in a day – only India and Zimbabwe had done that before – having only risen as a team up to this point, will take a while to get over.

Ravindra Jadeja became the pick of the bowlers for the hosts as he picked 6 wickets and gave away just 35 runs. The Test match was started with a quickfire century by the Indian opener Shikhar Dhawan, who became the first Indian batsman to score a century in the first session of a Test match.

Plenty of records broken in the Test match which was expected as well. But, the most interesting thing was that Afghanistan team has announced their arrival in Test cricket. Initially, it took them a couple of sessions to learn that what is the right line and lengths for the longest format of the game. However, in the second innings, some of their batsmen even figured out their defenses and sadly that’s what this match would be remembered for.

ALSO READ: Afghanistan Team Getting Some Interesting Food In Bengaluru

India’s stand-in skipper Ajinkya Rahane did a decent captaincy job by keeping Jadeja off the ball in the first innings in order to drag him longer. In second innings Jadeja kept up his habit of running through. And on a typical Indian dustbowl, its difficult for most of the batsmen in world cricket to defend the ball, especially against one of the best bowlers in the world.  Afghanistan batsman Shahidi and skipper Asghar Stanikzai kept some hopes for the visitors as compared to the first innings.

In the first innings, the initial Afghanistan wickets were either bowled or lbw. Indian bowlers stuck to the plan in the second innings as well. Umesh Yadav brought the flair, moving the new ball considerably in both innings, and Ishant Sharma looked content playing workhorse. However, it was R Ashwin who initiated Afghanistan’s downfall and eventually ended their innings before tea.

Earlier in the day, Hardik Pandya snuck in mature innings. India didn’t have as poor a session as they did at the end of day one, striking at more than four runs per over despite the four wickets they lost in stretching the overnight score of 347 to 474. Pandya saw through the tough phase before opening up.

Finally, it was the hosts, who lifted the trophy and Rahane extended his unbeaten captaincy stretch to a whole two Tests, he even called out to Stanikzai and now Afghanistan to pose for a group photo that’s going down in the annals of their cricketing history. It was a great gesture from the Indian skipper as he put the spirit of the game in front of the competition in the sport. 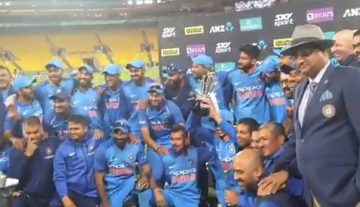 Article
By CricShots - Nov 2, 2019
IND vs BAN (1st T20I): India Looking To Continue Their Dominance Over The Tigers