Karun Nair led India A suffered their first match loss in the first four-day match against South Africa A at the Assupol Tuks Oval in Pretoria on Tuesday.

They failed to carry the performance against Afghanistan A. India A resumed Day 4 at 192/6, with a  target of 447, before scoring 211 to hand the home side a big victory.

Junior Dala was the star of the match with figures of 5/36 in his 10.1-over spell. He ripped apart the Indian batting and took the three beneficial wickets when required. They could only add 19 runs to their tally before they were bowled out for 211.

Shahbaz Nadeem (28), Aniket Choudhary (0) and Mohammed Siraj (6) fell in the span of a few overs as the Indian lower order collapsed. The match more or less tilted towards South Africa A when India was bowled out for 120, giving a first innings lead of 226 runs to the hosts.

Not a single batsman could score a huge run on the board except Ankit Bhawne who has 46 runs beside his name. Ishan Kishan, Shreyas Iyer, and Karun Nair too failed to deliver with the willow. South Africa A’s opener Stephen Cook was named the Man-of-the-Match for his 120 in the first innings that helped set up the victory for the hosts.

“We made it our mission to start the series off with a win, that was the big focus for the team and personal accolades should come after that. Obviously to contribute and to get some runs in a winning cause is always good and it’s always good to get the series off to a winning start. We know that the A side and even the Proteas’ time in England didn’t go too well, so it’s good to start our home summer on the front foot so we can build on to this momentum,” Cook said.

“The guys will want to go 2-0 up and keep the momentum going. When you’ve gone through some tough times where you haven’t won games, it makes guys all the more hungry to do well when times are good. Potch will be a different challenge, I’m sure the Indian team will come back stronger,” he concluded.

The second and last encounter will take place in Potchefstroom starting this Saturday. 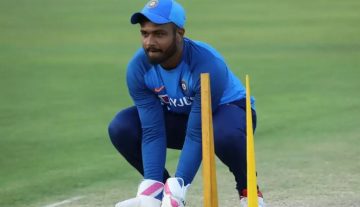 News
By CricShots - Sep 16, 2022
Sanju Samson To Lead India ‘A’ For The One-Day Series Against New Zealand ‘A’