After the tournament opener of the ongoing season of the Indian Premier League (IPL), a lot was said about the Chepauk pitch when the Chennai Super Kings (CSK) defeated the Royal Challengers Bangalore (RCB) in a one-sided game. Even MS Dhoni had criticized the surface. But come the second game after seven days, the curators have done a great job and the CSK skipper proved the same by as he finished the innings for his team. His unbeaten knock of 75 runs helped CSk to win the game by 8 runs.

After deciding to bat first, the hosts lost their openers very early. Ambati Rayudu and Shane Watson were dismissed in the powerplay itself. Even Kedar Jadhav fell soon as the CSK were in trouble at one stage at 27/3 in the fifth over.

Then walked in Dhoni to save the sinking ship at number five and the veteran proved it again. Along with Suresh Raina, he resurrected the innings to the large extent. The veteran duo added 61 runs for the fourth wicket and just when the things were looking great for the team. Jaydev Unadkat dismissed raina with a slower one.

On the other hand, Dhoni was calmly rotating the strike and taking the game deep. He didn’t play any rash shot or tried anything out of the box. After Raina’s wicket though Dwayne Bravo came and played a 27-run cameo much to the give some reason for his fans to cheer. As the innings went into the 19th over, Mahi went berserk and he was now set to launch his special massacre on the bowler.

Unfortunately for Unadkat, he came in the firing line in the last over. Dhoni brought all his experience together to smash the left-arm bowler for three sixes off the last four balls. The CSK skipper dispatched all kind of variations from the southpaw into the stands to churn out 28 runs off the final over to take them to a total of 175/5.

During the chase on the second ball of the innings itself, Deepak Chahar dismissed the RR skipper, Ajinkya Rahane as Ravindra Jadeja took a brilliant diving catch. Rajasthan lost the wickets of Buttler and Sanju Samson soon as well, as one point they were reeling at 14/3.

However, then, Steve Smith and Rahul Tripathi added 61 runs for the fourth wicket. But after Tripathi’s dismissal in the 10th over, Royals lost two quick wickets and they were struggling at 120/6 after Krishnappa Gowtham’s dismissal in the 17th over, with them requiring 53 runs in 23 balls. Then came a partnership of between Ben Stokes and Jofra Archer as they added 41 runs in just 18 balls as the equation came down to 12 in 6 balls.

Bravo came out to bowl the final over and dismissed Stokes in the first ball and hence, Rajasthan failed to chase down the total and Chennai won the game by 8 runs. 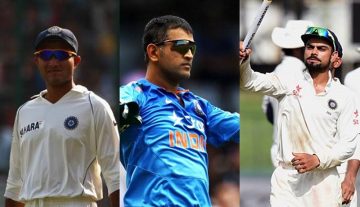 Article
By CricShots - Aug 29, 2017
The Formulae for Being Indian Cricket Team’s Captain Revealed