AB de Villiers pulled off another special knock for Royal Challengers Bangalore (RCB) for taking his team over the line against Rajasthan Royals (RR) in Dubai. He came out to bat in the 14th over of the innings and required run-rate being close to 11. RR looked hapless despite doing all things right owing to superb innings from De Villiers.

Earlier, the Royals opted to bat first, and surprisingly, Robin Uthappa and Ben Stokes came out to open. Uthappa attacked the RCB bowlers in the powerplay overs. The momentum was with RR after the powerplay thanks to Uthappa who scored 41 off just 22 deliveries before getting out to Yuzvendra Chahal. But RR suffered a double blow with Sanju Samson also following Uthappa in the dressing room in the 8th over.

At 69/3 in the 8th over, Steve Smith and Jos Buttler rotated the strike largely and made sure there was no collapse in the middle overs. The Royals’ skipper finally got back in form and scored a crucial half-century and took his team to 177 runs for the loss of six wickets in 20 overs. He got out in the final over after smashing 57 off 34 balls. Chris Morris was the wrecker-in-chief ending with the figures of 4/26 in his four overs.

Chasing 178, RCB suffered an early blow with Aaron Finch getting out early thanks to Shreyas Gopal. Virat Kohli and Devdutt Padikkal then build a strong partnership, but the dot balls in between were increasing the required run-rate. Kohli tried hitting sixes and fours in between but there were too few. However, having stayed in the middle for so long, both the batsmen got out on back-to-back deliveries.

While Padikkal hit a tired shot in the air to be holed out in the deep in the 13th over while Virat Kohli also got out in the next over with 76 to get off 41 deliveries. Two new batsmen, AB de Villiers and Gurkeerat Singh Mann didn’t give up. The former batted patiently and when it came down to 35 runs off the last two overs, he unleashed himself by smashing three consecutive sixes off Jaydev Unadkat in the penultimate over. Unadkar conceded 25 runs in the over including a boundary by Mann.

Jofra Archer was handed over the ball to defend 10 runs off the last over but the job was too easy for someone like AB De Villiers as he ended it with a six on the fourth ball. With this win, RCB now has 12 points in their kitty and they are looking extremely good to make it to the playoffs.

Washington Sundar gave just 26  in his spell of four overs despite bowling in the crucial juncture. He also managed to scalp as many as four wickets including, Steve Smith, Ben Stokes, Jos Buttler, and Jofra Archer.

AB de Villiers smashed his 37th IPL half-century to help his team to helped his team to chase down to the target of 178 runs. Coming in to bat at No. 4 in the 13th over, De Villiers was looking to up the ante at the team required run-rate close to 11. Having scored 55* (22) with the help of one four and six sixes, De Villiers played a major role in RCB chasing the down the total with a couple of balls to spare.

It’s been the second consecutive game when Jaydev Unadkat has failed miserably. RR hasn’t managed to win a single match besides the games in Sharjah and he costed the game by conceding 46 runs.

After scoring match-winning fifties against KXIP and CSK, Sanju Samson has been fairly consistent for RR. In order to Royals have a chance to reach the playoffs, Smason needs to be more consistent. 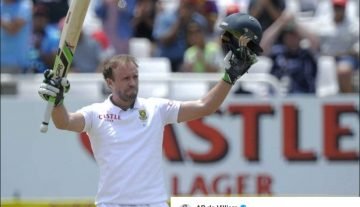 Article
By CricShots - May 25, 2018
AB de Villiers Leaves An Emotional Message For His Fans Post Retirement