Under the captaincy of Rohit Sharma, Indian Premier League (IPL) franchise Mumbai Indians (MI) won the titles in 2013, 2015, 2017 and 2019 — a record four times — but former Indian all-rounder, Irfan Pathan believes that many in the cricket fraternity still feel that “he needs to work hard”.

Clarifying the misconception about the Indian opener and the vice-captain of the Indian team in ODIs and T20Is, Irfan said Rohit “always talks about working hard” and puts the team first. Pathan also compared the MI skipper with domestic batting stalwart Wasim Jaffer to further elaborate his point.

During a show on Star Sports, Irfan said, “A lot of people are mistaken when they see a guy who has a lot of time and he is slightly more relaxed than compared to Rohit. Then you say he needs to work hard! The same things were said about Wasim Jaffer when you look at his aura when he used to bat he had a lot of time and we used to think – why isn’t he working hard – but actually, he was working really hard.”

Rohit wasn’t selected for India’s squad for the 2011 World Cup when the men blue went on to win the title for the second time at the ICC mega event under the captaincy of MS Dhoni. Pathan believes that is where Rohit was left behind in the race but he worked hard to post a strong impression after 2012.

Irfan explained, “He got the beating of not playing the world cup and then came back really hard because of a strong mindset after 2012.”

Rohit will next be seen leading MI if and when the IPL 2020 commences. The 13th edition of the cash-rich league was scheduled to start on March 29 but has been postponed indefinitely due to the coronavirus pandemic. 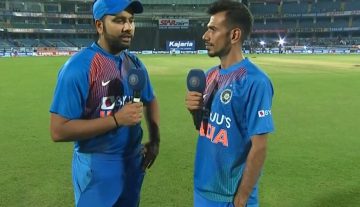