Despite being in the twilight of his career, MS Dhoni is termed as the best wicketkeeper in the world cricket currently, who is expected to keep the wickets for India in the forthcoming ICC Cricket World Cup in England. However, he didn’t have a memorable 2018 with the bat but he stopped all the talks about his retirement with the commencement of 2019. So far, Dhoni has scored three half-centuries this year.

Also Read: Dhoni is the best wicketkeeper in the world, says Owais Shah

He scored a half-century in his first three ODIs that he played this year before scoring an unbeaten 48 in the first One-Day International against New Zealand. Hence he missed a golden opportunity to score four consecutive fifties. However, Dhoni missed two ODIs after that in New Zealand due to a hamstring injury.

His glovework was never in doubt as he produced some lightning-quick stumping in the past. He has been exceptional behind the wickets and turned several matches in India’s favor by just his excellent keeping skills. But before turning a wicketkeeper, Dhoni was a goalkeeper during his school days in Ranchi. Thus, his love for Football can be seen every now and then.

Also Read: 5 reasons why Dhoni should not retire after WC 2019

Mahi played a charity football game in Juhu, Mumbai, earlier this week according to India Today. Some Bollywood celebrities also took part in the game including Dino Morea and Aparsakthi Khurana, brother of actor Ayushmann Khurana.

The 37-year-old is all likely to keep wickets for India at the forthcoming ICC Cricket World Cup 2019, which will be played in England. Some experts believe that it could be the last phase of Dhoni’s career and he might retire after that. But one never knows in what way Dhoni can surprise anyone. He leaving the Indian captaincy and his Test retirement is a good example of his unpredictability. Keeping his fitness level in mind, he might play for another one and half year. Only time will tell! 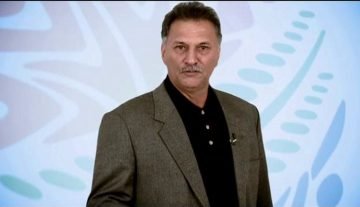