The Indian deputy skipper, Rohit Sharma reckons that when it comes to start playing a sport, age isn’t a barrier. The top-order batter put forth Michael Hussey’s journey for the Australian team to back his comments. The latter made his debut for Australia in 2004 when he was around 29 years old, but it was after he passed 30 that he started getting recognition.

Hussey played for Australia for seven years and earned the name of ‘Mr. Cricket’ owing to his stupendous level of consistency. He went on to score as many as 12,000 runs at the international level to go with 22 tons and 72 half-centuries. Rohit reckons that one should take a leaf out of Hussey’s books and take an optimistic approach towards life.

As per the quotes in India Today, Rohit said, “There is a very Australian cricketer Michael Hussey, he made is Australian (Test) debut when he was 30. He played for 6-7 years and he is called Mr. Cricket. This is good learning for all of us, there is no age to start any sport.”

ALSO READ: RCB Goes Through A Logo Makeover And SRH Took A Dig At Them

Rohit also cited the example of popular footballer Cristiano Ronaldo, who lost his father at the age of 20 and was raised alone by his mother. He said, “Ronaldo is a big example. He lost his father at an early age. He was brought up by his mother alone, it was not an easy household to be a part of. But look where he is now. You can’t stop believing.”

The veteran Indian opener as recently been ruled out of the Indian squad for the Test series in New Zealand. However, a calf injury ruled him out of the series. He sustained the injury during the T20I series against the Black Caps and then went on to miss the three-match ODI series as well.

WATCH – Injured Indian Players Having Fun At The NCA

Rohit is also likely to miss the ODI series against South Africa and is expected to make a comeback for the Mumbai Indians (MI) in the 2020 edition of the Indian Premier League (IPL). Rohit has played alongside Michael Hussey for the four-time IPL champions. 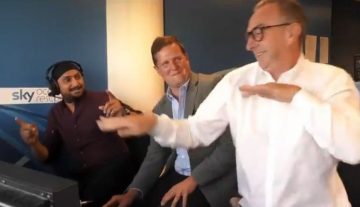