For Prithvi Shaw, 2018 has been a dream year as after leading India the U-19 team to lift the World Cup earlier this year in New Zealand, he enjoyed an impressive outing in the Indian Premier League (IPL) 2018 as well. Now, he has been called up for the Indian Test squad for the final two Test matches in England, but surprisingly, Sachin Tendulkar had long ago said that Shaw would go on to play for the national team.

Shaw, along with the Andhra batsman Hanuma Vihari was included in the Test squad led by Virat Kohli for the ongoing Test series. Out of form opening batsman, Murali Vijay and chinaman bowler Kuldeep Yadav were excluded from the squad that was picked for the first three matches.

Speaking during a live interaction with fans on his app 100MB, Tendulkar said: “Ten years ago, one of my friends asked me to take a look at a young Prithvi. He asked me to analyze his game and see if there anything he could work on. I had a session with him and gave a couple of pointers on how to improve his game.”

He further added, “I told my friend later that he is going to go on and play for India. I asked him not to change his grip or stance, irrespective of any future instructions from his coaches. If anyone asks him to do so, tell them to come to talk to me. Coaching is good, but overcooking a player with tweaks is not.”

The talented youngster has been grabbing a lot of eyeballs ever since he played for Mumbai in the semi-final of the Ranji Trophy in 2016-17 as a 16-year-old. Till date, Prithvi has played 14 first-class games so far at an impressive average of 56.72 and already has seven centuries and five half-centuries.

Shaw had a magnificent series for India ‘A’ in England, scoring over 600 runs in 10 innings. His highest score of 188 also came in the game against the West Indies ‘A’ at Beckenham in this series. In the recent two-unofficial Test series against South Africa ‘A’, too, Shaw hit a century in Bengaluru. 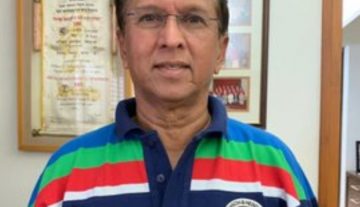