Afghanistan and New Zealand locked horns in a virtual quarter-final of group 2 match in the T20 World Cup 2021 in Abu Dhabi. India were wanting Afghanistan to win as it would clear their path for the semi-final.

Mohammad Nabi won the toss and elected to bat first. Afghanistan brought Mujeeb Ur Rahman back in place of Sharafuddin Ashraf while New Zealand remained unchanged for this game.

New Zealand pacers were on the mark from the very beginning. Afghanistan openers Mohammad Shahzad and Hazratullah Zazai found it hard to cut loose in the powerplay and both of them got out cheaply. Rahmanullah Gurbaz also fell cheaply as New Zealand reduced Afghanistan for 19/3 in 5.1 overs.

Gulbadin Naib and Najibullah Zadran partnered together to steady Afghanistan’s innings and but the former fell to Ish Sodhi. Mohammad Nabi and Najibullah added 59 runs for the fifth wicket and it looked like Afghanistan will pose a good total on the board. But wickets in the death overs didn’t allow them to go for the kill.

In response, New Zealand had their eyes set on the target which would propel them into the semi-finals. Daryl Mitchell got out to Mujeeb inside the powerplay but other than that, New Zealand didn’t allow Afghanistan spinners to run riots. Martin Guptill went for a slog-sweep against Rashid Khan which brought his downfall.

Also Read: Sunil Gavaskar feels both Afghanistan and New Zealand will be under pressure

Kane Williamson and Devon Conway partnered together and ensured there were no other hiccups. Both batters stitched together an unbeaten 68-run stand to guide New Zealand home with eight wickets in hand and 9 balls to spare.

By winning this, New Zealand made their place in the semi-final and knocked India out of the T20 World Cup 2021.

I actually fancy #NZ winning the title. Have not shown the same flair and flamboyance as England, Pak, Australia, but have shown solidity, depth and resourcefulness in batting and bowling, brilliant in the field and led by a superb captain.

Congratulations to the 4 semifinalists #T20WorldCup England , Australia, Pakistan and New Zealand. Probably the 4 best sides in the competition . Maybe we could say South Africa are the team that missed out as they got better through the tournament

Nz batters playing the spin of Mujeeb and @rashidkhan_19 very smartly ! Looking for singles and putting the bad balls away ! In a pressure game to qualify its a good game plan . Something youngsters should watch and learn that T20 it’s not just only about big hits . #AfgvsNZ

Fair result. 2 best teams from the group make it. Pakistan And NZ def the top two from the group. Now to the Rohit Rahul era in white ball cricket. Not the best end for Virat in world cups but that’s how sport is.

New Zealand the only side to reach the semi-finals of the last T20 World Cup, ODI World Cup and the final of the World Test Championship (which they won).

With the smallest population of the 12 Test nations, remain a model for how to run the game in a country

#NZ are *remarkably* similar to #PAK. They both have bowling-heavy strategies & batting strategies designed to bang out par. These compliment each other because the bowling is able to defend par & aiming for par prevents the shallower batting from being exposed. #T20WorldCup

Regardless of whosoever you support today, Zadran has been phenomenal #AfgvsNZ 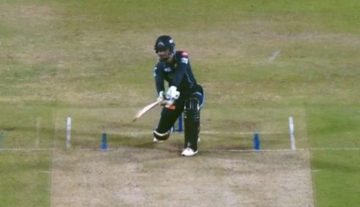