On Friday, the Indian team suffered a thrashing loss by a margin of 8 wickets against England in the first T20I of the five-match series at the Narendra Modi Stadium in Ahmedabad. While the fans witnessed how the visiting team completely outplayed the strong-looking hosts, there was another incident that caught everyone’s attention. All-rounder Washington Sundar was involved in a heated verbal exchange with England batsman Jonny Bairstow during England’s chase.

The incident took place during the 14th over after Dawid Malan chipped a delivery from Sundar and the latter went for a catch on his follow-through at the non-striker’s end.

The all-rounder failed to grab the ball as it hit Bairstow on the helmet as he was trying to get back in the crease. Miffed over the missed opportunity, Washington Sundar was seen venting it out at Bairstow as both of them exchanged a few words. Before the scenes could get more intense, on-field umpire Nitin Menon decided to come in the middle and normalized the situation.

Here is the video of Sundar engaging in banter with Bairstow:

Chasing a modest target of 125, the visiting team went over the line in the 16th over. Jason Roy top-scored for the visitors, scoring 49 runs at the top to lay the foundation for an easy chase. With only 124 runs to defend, India needed early wickets to stand to get back into the game.

Team India came up with a poor batting display as the visitors had decided to bowl first. The Men in Blue could only manage 124 for 7 in the allotted 20 overs. Eoin Morgan’s decision to bowl first was justified by his bowlers as it difficult for the Indian top-order to survive. 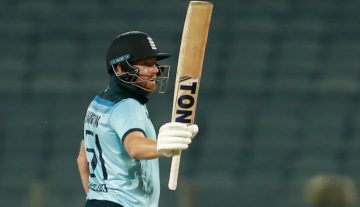 News
By SMCS - Aug 3, 2022
Jonny Bairstow to miss The Hundred to focus on Test series vs South Africa