Indian cricket team won the 3-match ODI series against New Zealand 2-1, with a close win over the visitors in the third and deciding ODI at Kanpur.

A lot of credit for the win goes Rohit Sharma and Virat Kohli, apart from Jasprit Bumrah. Both Rohit (147) and Virat (113) put on a record fourth 200-run partnership to take India to 337 runs for the loss of 6 wickets. Both the skipper and his deputy were played aggressive cricket as Kiwi bowlers were smashed to all parts of the Green Park Stadium in Kanpur.

The duo built a 230-run stand from 211 balls and looked unstoppable for the Kiwis. After the match, they both were seen talking about their cricketing skills, the fellowship between the two and how they managed to avoid running each other out, despite their best efforts.

Here is the Virat and Rohit having a chat and some laughs: 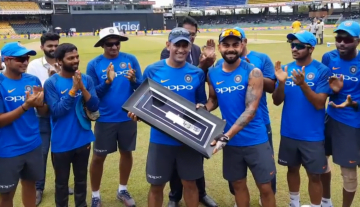 News
By Aditya Pratap - Feb 6, 2018
Dhoni and Kohli will be on the cusp of record in Cape Town ODI