The Indian leg-spinner, Yuzvendra Chahal made the announcement of getting engaged with the choreographer Dhanashree Verma through an Instagram post on Saturday. Sharing pictures from their engagement ceremony, Chahal wrote: “We said “Yes” along with our families.” While two of the photos he shared were of the couple, there was one with Chahal’s parents and Dhanashree’s family.

Dhanashree Verma, apart from being a choreographer, is also a doctor and she holds a well-managed Youtube channel. She also shared the photos from their Roka ceremony on Instagram, with the same caption on her post.

Dhanashree Verma has often been seen featuring some of Chahal’s Instagram posts and live chats. Congratulations poured in for the couple on social media.

In his international career so far, Yuzvendra Chahal has played 52 ODIs and 42 T20Is for the Indian team. He has taken 91 wickets in ODIs, while he managed to scalp as many as 55 wickets in the T20Is.

The Indian leggie can be expected to get back ion teh field during the Indian Premier League (IPL) 2020 which is scheduled to commence on September 19, where he will be playing of the Royal Challengers Bangalore (RCB). 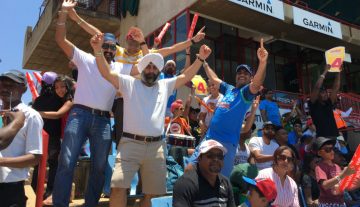