The Indian leg-spinner Yuzvendra Chahal feels there is nothing much to ponder for Team India after facing a 0-3 series loss against New Zealand saying it’s not possible to win every match and credit must also be given to the opposition for their outstanding performance. After whitewashing the Kiwi in the five-match T20I series, the tourists were the favorites in the ODIs as well.

However, New Zealand, playing ODIs for the first time since their final defeat to England in the ODI World Cup final, beat India comprehensively. Talking about the same during the post-match press conference, Chahal said, “Overall, if you see it is just the fourth or fifth series loss in the last 4-5 years. You cannot win every match. We have won one series, lost the other, so it is not something too serious to ponder over.”

Chahal said the team is focused on the positives rather than mourning over the series whitewash.

Talking about the positive, Chahal said, “Prithvi Shaw and Mayank Agarwal came into the side, so youngsters got to play outside India. It is not easy to play in New Zealand. We did win the T20 series 5-0, first time, that’s a positive for us as well. You can see the confidence in them. They are 25-26 years old and batting with maturity. It is not easy to bat in the middle overs especially when the spinners are bowling. Rahul has also batted up the order at times. So, it shows the maturity that he knows what the team needs.”

New Zealand completely outplayed the Indian team and the Indain leg-spinner acknowledged their superiority but added this gives them an opportunity to work on their shortcomings.

Chahal further elaborated, “They (New Zealand) have played quite extraordinarily in this series. Poor fielding happens at times. Once in 10 series it happens, we have time until the next ODI series. We have seen what are the shortcomings and we have enough time to work on it before the next series. The main exertion happened in the T20s. We are professional cricketers so we didn’t think much about it.”

Left-arm spinner Kuldeep Yadav and Chahal are yet to play together since the ODI World Cup last year. The wrist-spin duo had helped India establish a template of taking wickets in the middle-overs not allowing their opponents to settle in.

When asked why the duo hasn’t played together, Chahal replied, “Ravindra Jadeja is playing extraordinarily well, whether it is batting or bowling or fielding. So, I play half the matches and Kuldeep plays half the matches. The main motive is to do what is best for the team. If wickets allow that, maybe all of us will play together again.”

During the third ODI, Chahal took 3/47 and was taken off the attack every time he made a breakthrough. Justifying the same, the leg-spinner said they were willing to take the wickets and when he got it, the idea was to save run for a couple of overs from the end and make chances for taking wickets. 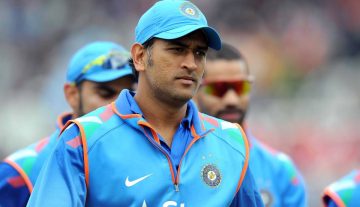 Article
By CricShots - Jun 16, 2017
How MS Dhoni transformed Team India into a better fielding side