Former Australian opener Matthew Hayden heaped praises on Indian skipper Virat Kohli, who scored his 41st One-Day International hundred against Australia on Friday. During the Ranchi encounter against Australia, Kohli backed up his Nagpur ton with yet another sensational hundred but he couldn’t take India over the line. Australia won the match by 32 runs and pulled themselves back in the series.

Though, Hayden was impressed by Kohli’s ability to hit centuries at will and term it as absolutely staggering. Indian skipper scored a 95-ball 123 in Ranchi and was a thorn in Australia’s flash until they dismissed him.

After the conclusion of the match, Hayden told Star Sports “Absolutely staggering. I am trying to think back, check the memory banks of brilliant players over the years. Maybe Brian Lara in his heyday, Sachin Tendulkar and Sourav Ganguly all these players have been on top of their game at various points in one-day cricket. But Virat Kohli is doing it so easy. He is drifting away to a hundred. Not only that, just the way he is transcending every game seems to be a different performance.”

Hayden, who was himself one of the most feared one-dayers batters in his times, added, “Tonight, on a better wicket, he made it look so easy. He does play out of his skin. It was outstanding, no area was untouched. We all know he loves playing through the mid-wicket area but tonight he played some cut shots and took on the spinners. It was just a remarkable innings, can’t say anything more than that.”

The southpaw praised Kohli’s energy on the field and his intent to win the game. “I think he has always got great energy and the intent and he’s got the fitness to be able to do it. It’s almost like one performance leads to the next. His tempo is incredible. We saw the likes of Vijay that had an opportunity to bat with him. That’s only going to be good for India ahead of the World Cup,” Haydos concluded.

The fourth ODI will be played on Sunday in Mohali’s PCA Stadium. The fate of the series is all likely to be decided in this fixture. 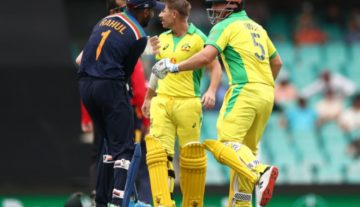