Under the leadership of Virat Kohli, Team India has registered yet another series win on Friday as they defeated Sri Lanka in the third T20I by 78 runs. The Indian openers, Shikhar Dhawan, KL Rahul along with the collective bowling effort helped India to seal the game quite comfortably.

Chasing a huge target of 201 runs, Sri Lanka got the worst possible start with openers, Avishka Fernando and Dhanushka Gunathilka walking back for a cheap score. However, Angelo Mathews and Dhananjaya de Silva showed some resistance in the middle to avoid further hiccups as they added 66 runs for the 5th wicket.

Earlier, the Indian openers went berserk from teh word go. They both added 97 runs for the first wicket before Dhawan being dismissed after adding 52 on the board. He was quickly followed by Sanju Samson and Rahul, which turned things for Sri Lanka. Shreyas Iyer also followed the duo to help further Sri Lanka to make a comeback into the game.

However, Kohli came to the party for India, who smashed Sri Lanka to all corners of the park along with Manish Pandey. His fantastic knock in the slog overs helped India to finish the game on top with a massive tally on the board.

Just when things looked out of the hand got Sri Lanka, the run out of Virat helped the Islanders to stage a comeback into the game. The decent spell in the final overs helped India to restrict for a low score than what was expected earlier. The regular wickets in the middle overs helped Sri Lanka to stay on top of the game before Shardul Thakur showing his skills with the bat as he added 22 in just 8 balls. In the end, all they managed was 201 on the board.

Here is how Twitterati reacted to India’s series win:

Saini picks up his THIRD. Sri Lanka are all out for 123 runs.#TeamIndia win by 78 runs and win the series 2-0 👏🎉#INDvSL pic.twitter.com/5XwoXPeNBx

Fantastic to be at the venue ⁦@StarSportsTamil⁩ #pune #indvsl This is great fun.. hopefully more of this 😊 pic.twitter.com/Rv0TbaVpbZ

Shardul Thakur is making most of the limited opportunities coming his way. Some crucial runs. Wickets. And while there’s a lot of cricket left today, I’m already picking him as my Man of the Match…i.e. if India wins. #IndvSL

A truly roller coaster of an innings #INDvSL

Kids right now get fascinated by watching Flintoff vs Kallis. There will be a day when my kids will ask who is this star striker and the bowler? I will reply "Shardul" and the bowler is Malinga.

Navdeep Saini in the T20 series:

Thakur in the T20 series:

Well played India, but frankly no contest as Sri Lanka found wanting in all departments

India have now won 19 bilateral series against Sri Lanka on the trot across all formats. That's a tale of incredible dominance in last 11 yrs. Sri Lanka are bread & butter for Team India. #INDvSL 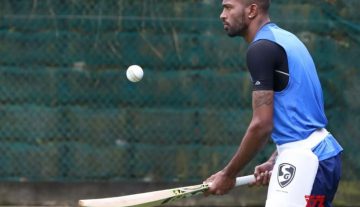 News
By CricShots - Oct 1, 2019
Hardik Pandya Also Be Visiting UK For Treating His Back?