On Tuesday, Pakistan’s premier fast bowler Mohammad Amir has been blessed with a beautiful daughter in the morning.

The Pakistani pacer has named his cute little girl as Minsa and the occasion it is also the day of the inauguration of the much hyped ‘Independence Cup’ between Pakistan and World XI. The bowler had already announced that he won’t be a part of the historic series in his own country for the same reason. He and his wife

However, Amir had already announced that he will not be able to be a part of the historic series in his own country for the same reason. Currently, the pacer is in England along with his wife Narjis Khatun and chances of him featuring in the  Independence Cup are negligible.

The southpaw also shared the pic of him with his daughter in his official Twitter account. His tweet read: “Shukar Allhumdulilah blessed with the Rehmat of Allah?????Mashallah”. 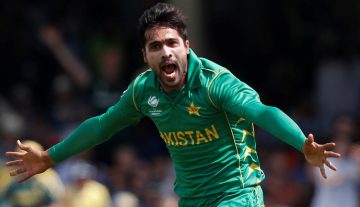