In one of the most bizarre T20 match between Myanmar and Malaysia, there were a total of only 20 runs scored in the match that took place on Tuesday. The two teams were locking horns with on each other in a World T20 Qualifier Asia B encounter at the Bayuemas Oval in Kuala Lumpur.

Batting first, Myanmar only managed to score 9 runs in half an hour, during which they lost as many as 8 wickets. It was Malaysia’s Pavandeep Singh, who bowled a spell of 5-1 was the wrecker in chief for his side. Myanmar failed to even get to double figures when torrential rains forced the match to come to a complete halt.

Malaysia got the benefit of the weather but the ground staff along with the entire Malaysian team put in a tremendous effort to drain the outfield of stagnant water. The game was then allowed to restart, and Malaysia was set a revised target of 6 runs from as many as 8 overs.

With victory pretty much guaranteed, Malaysia came out to get the required runs but didn’t cross the finish line without losing their openers Anwar Arudin and Shafiq Sharif to Pang Danu in the very first over without scoring. But needing just 1 to win, Suhan Alagaratnam smashed a straight hit for a six to win one of the most dramatic yet low-scoring cricket matches in history. Malaysia finished on 11 for 2 and won the match by 8 wickets.

What a spell by @MalaysiaCricket's Pavandeep Singh in their win against Myanmar at the @WorldT20 Asia B Qualifier! 🙌 pic.twitter.com/Po2DIadwJ5

Speaking at the end of the match, as quoted in India Today, Malaysia’s captain Ahmad Faiz said, “We hoped to finish in the first over but the wicket was a bit wet and the bowler bowled into that patch. Credit to him for getting our main batsmen out. But 11 runs in 10 balls is quite impressive for me.”

ALSO READ: Virat Kohli Gets A Statue At Madame Tussauds In Delhi

Earlier in the match, Malaysia won the toss and elected to field first. Since there was the threat of rain looming, the Malaysians decided to go all out on the spin in a rush to get a win. The hosts made a terrific start as Pavandeep began his four-over spell by trapping opener Lin Thu leg-before with the first ball of the innings before getting rid of Ye Naing Tun two balls later. Anwar Rahman then claimed two wickets for three runs before rain threatened to wreck Malaysia’s hopes of finishing third.

Talking about the same, Faiz said, “When it started to rain, we hoped to bat again. Thanks to the curator, ground staff and the boys, we worked hard to get the ground dried. We were lucky we managed to get it done and the umpires gave us eight overs.” 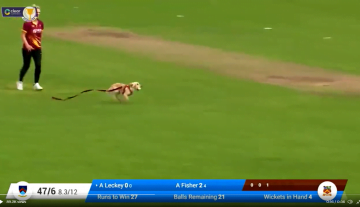 Videos
By Aditya Pratap - Sep 11, 2021
Watch: Another Pitch Invasion, And It’s Not Jarvo This Time